After their experience with their Level Up Village Global Scientists projects, students in Mrs. Meredith’s class wanted to create a media message to encourage people to save water.  They had learned that, in their community, water waste was one of the biggest issues. Check out some of their water conservation projects using Adobe Spark. 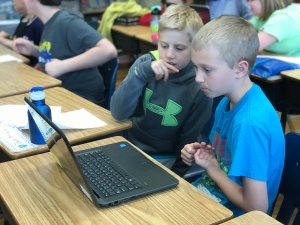 Here is my ignigte speech on Sustainable Development Goals.  It was the first time I’d ever done an Ignite presentation (20 slides, 15 seconds per slide, 5 minutes total).  We were supposed to pick something we were passionate about, so I picked Sustainable Development Goals.  I hadn’t known about them before last year, and I thought there might be other people like me who hadn’t heard of them either.  I thought it might be a good way to at least introduce them to some educators.

I did misquote a couple of statistics–I was a little nervous!  Here’s are a few excerpts with the correct statistics and some links to more information.

The first goal, eradicate extreme poverty and hunger, was to halve the proportion of people living in poverty by 2015. The MDGS use a 1990 statistic as their baseline that said that 36% of people in the world live in extreme poverty. Their goal was to reduce that proportion to 18%.

Did that happen? No.

Actually, by 2015, the proportion of people living in abject poverty was reduced to 12%, so we exceeded that goal! Progress was made in other areas too!

We still have a long way to go, but it actually may be possible, if we all work together, to end poverty for good! The world CAN get better!

After learning about what the SDGs were, I began researching how to help. I wanted to know how can citizens and teachers and principals and ITRTS and tech leaders and STUDENTS help with these lofty Goals? I think there’s three main ways.

First, check out the SDGs and learn more!
There are tons of resources out there, from apps, to websites, even online courses.

Second, incorporate the SDGs into your classroom – find lessons or projects to join!
Not only are their resources for you to learn more, but there are resources already available for you to use with your students. We talk about 5 C’s and PBLS, and global goals are the perfect way to be able to incorporate those concepts.

Share the global goals with your students, find a lesson, and empower them to make a difference in their world! And if you are in a position where you work with teachers, help them find these resources and support them as they use them! There are all sorts of projects that students can join, or you can make your own!

Third, it’s been said that Knowledge is Power. Spread the word! Be an advocate!
As educational technology leaders, we hopefully have the ability and platform to spread the word! Participate in Global Ed Twitter chats, use the hashtag #teachSDGS and #GlobalEd really use the power of social media to get the word out!